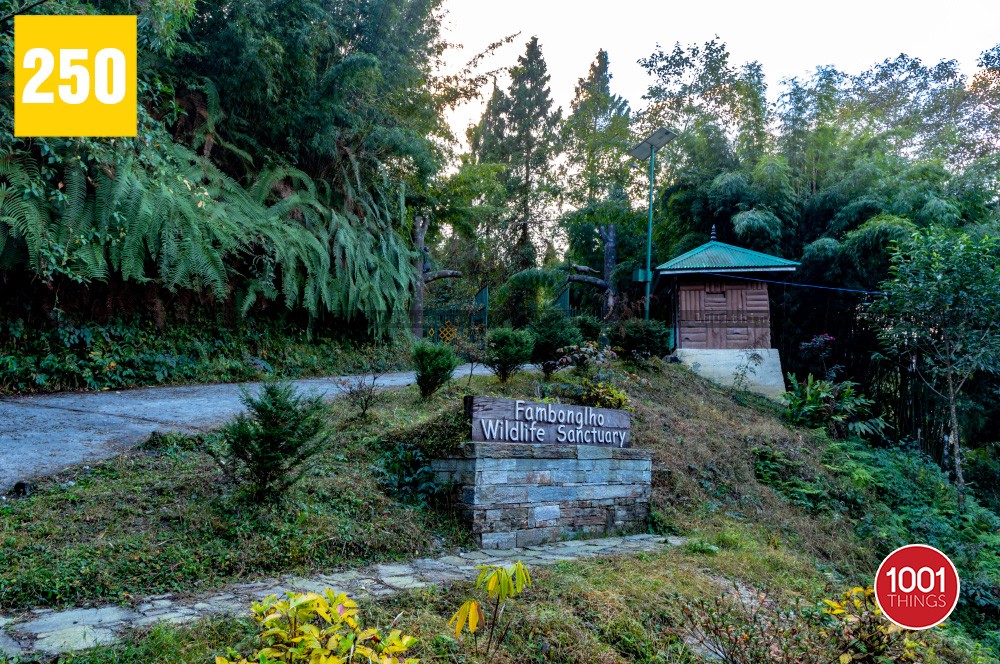 Fambong Lho Wildlife Sanctuary is one of a kind destination. Its biodiversity ranges from the
Palearctic realm to the Indomalayan realm. It is one of the well-protected Himalayan
Sanctuaries with rare and exotic flora and fauna in abundance. This Sanctuary is not only known
for its fascinating sights and nature, but it draws curious explorers to its age-old myths and
legends. It’s a well-defended region that retains sacred spots to the ethnic community and the
tribes of Sikkim.

When it comes to its visual narrative, Fambong Lho has the most beautiful landscapes. It calls
the wanderlusts and ardent peace-seekers to its breathtaking and serene realm. The evergreen
canopy thrives with the bountiful Himalayan vegetation. A large variety of avifauna thrives here.
Their sweetest melodies often seem to welcome the keen explorers. Amidst the silence and the
solitude, the sudden chirping of these feathered beauties acts as an ice-breaker between explorers
and nature.

Fambong Lho is known for its spring allure. A large variety of rhododendrons thrive here, which
bloom in Springtime and convert its solitary domain into a paradisiacal charm. The magic of
Spring not just attracts humans but also invites a large variety of birds and butterflies. Apart from
this, a great variety of wild orchids are found here. The dense and evergreen forest well sustains
the rarest avifauna and the wildlife in the region. Contrary to the crowded cities and beaches,
It offers unparalleled serenity and solitude, allowing you to immerse yourself in the
charm and freshness of nature.

Fambong Lho derives its name from one of the oldest tribes, the Lepchas. In the Lepcha dialect,
the word ‘hambomloh’ literally means “wild local avocado trees” (Machilus edulis). Machilus
edulis trees provide shelter to the weary explorers. Its fruits are edible and contain health
benefits. The fruits are quickly sold in the hilly markets.

It has an altitudinal range between 1524m to 2749m. Chuli hamlet snuggles at the
top of Fambong Lho Wildlife Sanctuary. The entire area between the log house of Fambong Lho
and the Chuli trekkers hut is uninhabited. Gangtok lies on the eastern side of Fambong Lho while
Khangchendzonga National Park lies in the west. Some riverine tributaries from the North enrich
the thriving biodiversity and eventually join in Teesta and Dikchu Rivers.
Tinjure is the highest point of Fambong Lho Wildlife Sanctuary known as an extension of Kanchendzonga National Park, It is located 30 km west of Gangtok. Owing to its dense biodiversity sprawling over the 51sq. km mountainous terrain, Fambong Lho is home to rare birds and animal species.

Things To Do & Major Attractions:

Fambong Lho has amazing nature trails for short-distance trekking. Golitar, particularly, the
buffer area of the sanctuary offers an unobstructed view of the majestic Kanchendzonga range.
Fambong Lho Wildlife Sanctuary hosts a few tiny hamlets within its tranquil territory. Dikchu,
Pangthang, and Mangan fall under its realm and are managed by the State Forest Department.

The less trodden territory of Fambong Lho is home to a large variety of Himalayan flora and
fauna. From the largest variety of rhododendrons to the rarest variety of wild orchids, the animal
species from red panda to musk deer, blue sheep, the Himalayan black bear, including snow
leopard call it their home. Besides, Fambong Lho Wildlife Sanctuary is home to a large variety
of birds and butterflies.

Frequently spotted mammals in this sanctuary are barking deer, yellow-throated marten,
Himalayan brown bear, and red panda. Besides these, takin, red fox, and musk deer are also
present at higher altitudes. Some very commonly seen mammals in this wildlife sanctuary are the
Himalayan striped squirrel and Royle’s pika of the family Ochotonidae.

The Myths & Legends of Fambong Lho:

Fambong Lho Wildlife Sanctuary holds a great cultural significance for the tribes of Sikkim as
several myths and legends are associated with it. According to the legends, the Lake of Pigs,
“Phag Tso” in Fambong Lho is believed to be the residence of the mermaid protector Tsomen.

The legends even have it that once a monk named Lama Ralchen pierced the land near Gangnag
with his trident, which resulted in the formation of the Chumi Gey (source of sacred spring
water). The source of water is still the most vigorous source of perennial water for the
inhabitants of this region.

The tribes dwelling in the region are well-rooted in the age-old culture and traditions. They
worship nature and have high regard for their ancestral deities. Once in a while, a monk performs
rituals and offers smoke offerings to mountain deities at the Fangnag hermitage.

In December – February, mysterious Fireballs called Dza appear from Mara Chu. Many
eyewitnesses claim that Dza flees at a terrific speed and drops over the waterfalls at Makha and
Loom. Locals believe that the Dza radiates an inauspicious shadow when flying.

Amongst all the myths and legends, the legend of the Sokpa, also called Yeti or Abominable
Snowman or Azo Me-gyod is famous. Sokpa is still known to reside in the forests of Fambong
Lho.

Fambong Lho is a great option to escape the summer of the plains and the metropolises. The
summer season between March and June is the best time to visit Fambong Lho Wildlife
Sanctuary. The weather during these months remains quite pleasant. You can enjoy the
dreamlike sights of the blooming rhododendron forests during this time. Also, the prospects of
spotting birds and wildlife are higher during this season.

Getting There
Fambong Lho Wildlife Sanctuary is located at a range of 30 km from Gangtok. You can get taxis
from the main city to the sanctuary daily. You need to obtain permits to get there. For permits,
check with the National Park and Wildlife Sanctuary Permit Issued by the Forest Department at
Gangtok.