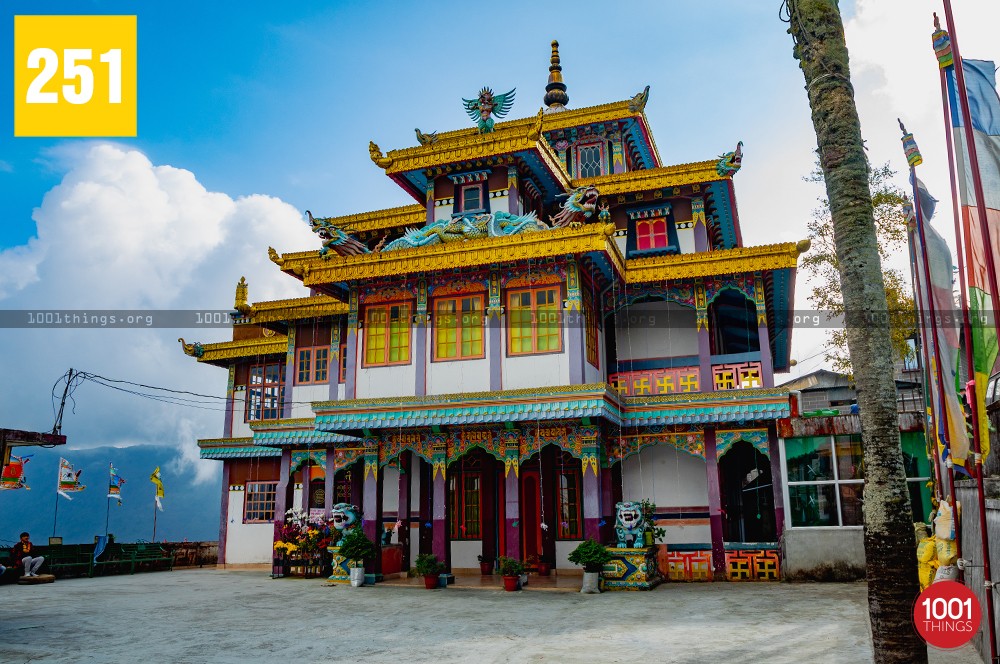 Yolmowa Mag Dhog Monastery is one of the oldest Buddhist monasteries in Darjeeling, it is located in the small beautiful village called Aloobari about 3 Kms from the town of Darjeeling town and hence it is popularly known as Aloobari Monastery.  It was built during the beginning of the first  world war in the year 1914 by its head priest Ven. Sangay Lama, a highly revered religious leader of the Yolmo people belonging from the North-Eastern Nepal who later settled in Darjeeling.

The monastery was dedicated to the cause of  world peace as its construction coincided with the beginning of the first world war and thus the name was given as Mag Dhog which meant warding off the war, Mag means war and Dhog means peace. The monastery is a sanctum sanctorum of the Yolmo people, a small ethnic group and has helped them to safeguard their distinct social, cultural identity.

The monastery also preserves several ancient Buddhist manuscripts. The rare gold-inlaid Tibetan manuscripts with more than 600 pages have been safely conserved here, it is scripted in an ancient Tibetan text called Gyetongba, which contains teachings of Buddhism. The manuscripts are in the Tibetan script Sambhota, named after its inventor. There are two volumes, one containing 322 pages, and the other with 296 pages, Each volume contains 8,000 verses. It is said that it was brought from Helambu, Nepal in the early 18th century.

The original monastery was a small single storeyed structure, which was damaged by the earthquake of 1934 and the new monastery was constructed by Lama Nima Chhogyal, an eminent son of the head priest on the land donated by an anonymous benefactor. It was completed in 1937. This monastery belongs to Nyingma Dorjay Drak traditions and it is a religious center open to all Buddhist communities.

The statue of four directional dignities, tigers,snow lions, dragons and garuda has been installed in the different directions of the monastery, in Tibetan Buddhism, the four dignities are believed to be the most powerful deities protecting not only our dreams but our minds as well, they also protects Buddhism and Dharma. They are also known as the four Gods or the four auspicious ones.

The interior of the monastery is beautifully painted with traditional Buddhist wall paintings called Thangkas depicting the life of Lord Buddha and his teachings as well as that of the other Buddhist deities and Bodhisattvas, the most prominent subject is Bhavachakra or Kaalchakra, the wheel of life or wheel of time respectively, it is an art to represent enlightenment visually. The paintings are said to have been done with natural herbs and grass. The main hall contains the statues of   Chenrezig, Vikchuni Kamala Devi (Gelug Palmu) and Amitava Buddha , there are also the altars and space for monks and worshippers.

The idol of Guru Padmasambhava, Mendharava, Khando Hissey Chogyal, Mahaguru Dorjay Dhakpochal,Khasarpaani chenzirig are installed in the first floor of the monastery. The small chamber in the top floor has the statue of Shakyamuni Buddhi with his two principle disciples Sariputra and Maudgalyayana and numerous small idols of Lord buddha.

The stunning views of the Eastern Himalayan range can be best viewed  from the monastery.

How to reach here ?

Those who love to hike can plan a trip and walk all the way from the Chowrasta (The Mall)  or via Jalapahar and explore other places in between. The vehicles are also easily available from Clubside or Chowrasta itself. There is another route from Jorebunglow which is just 2 Kms away.