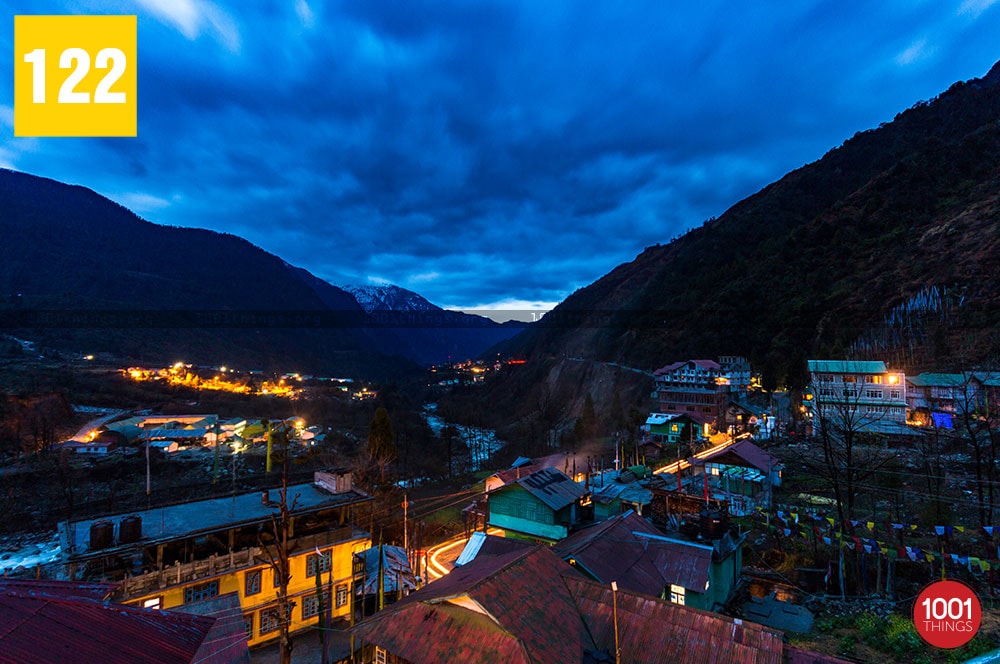 Lachung is a small town in the Northern district of Sikkim, situated at the elevation of about 9000 ft. It is a delightful and serene little town ensured by the encompassing mountains, unblemished waterfalls and alluring streams. It is located at the confluence of Lachen and Lachung Rivers, which is merged to river Teesta at a place called Chungthang. Lachung is 125 Km from Gangtok and it takes about 5 hours drive. From Chungthang the road separates for Lachen and Lachung.

The word Lachung means “small pass”, it was a centre for trade between Sikkim and Tibet in the past as it is located near the border with Tibet ( now China) , but it was closed after the Chinese annexation of Tibet. The town is mostly benefitted by the tourism industry as it is used as a base camp by the tourist visiting Yumthang valley and Yumesamdong, most of them prefer to spend few days here on exploring the place. There is an old monastery situated amidst apple orchards on the other side of Lachung river, Lachung is also famous for the cultivation of apples, apricot and peaches.

Arrangement for skiing has been made in a place called Phuni valley near this town. It is also an ideal place to visit famous Shingba Rhododendron sanctuary, which houses more than 400 species of rhododendrons. During winter the town is usually covered in snow. The inhabitants of the place are mostly of Lepcha and Tibetan descent.

In spite of the influences of a large number of foreign and Indian tourists Lachung still retains its distinctive culture and tradition, the Dzumsa (dzom sa) system is an interesting example of a political institution inherited from the past that has managed to survive, it is the unique system of self-governance, where all local disputes are settled by a representative body of the village which is headed by an elected Pipon. Lachung has been described as the “most picturesque village of Sikkim” by British explorer Joseph Dalton Hooker in his definitive, The Himalayan Journal (1855).

Sikkim is enriched with abundant natural splendor. The tiny mountain state is well known for its exotic flora and fauna. The pride of Northeast, Sikkim is the abode of the sacred peak Kanchenjunga that keeps the essence of the legends and folklores of the oldest tribes. Sikkim is a paradise for the explorers. For the Buddhist devotees, it is a pilgrimage locale, housing maximum, and the oldest monasteries in India. The state holds the record of the first organic state in India and in the world. Each district in Sikkim holds it’s peculiarities. Amongst the four districts, North Sikkim is one of the least explored places in India. From the therapeutic hot springs to the engrossing valley of flowers, the oldest tribes to the topmost edge of the motorable spots, North Sikkim extends the element of “once in a lifetime” experience to anyone who enters in its territory.

Lachung, North Sikkim: Lachung is a small townlet in North Sikkim. Due to its proximity to the Tibetan border, it served as the trading post between Sikkim and Tibet before the Chinese invaded Tibet in 1950. Located at an elevation of 2700metes, Lachung is one of the attractive places in Sikkim. “The Himalayan Journal (1855)” by the British explorer Joseph Dalton Hooker, Lachung has been described as the “most picturesque village of Sikkim”.

Lachung is inhabited by Lepchas and Tibetan. The languages spoken before are Lepcha, Bhutia, and Nepali.

Lachung is home to the 19th-century Buddhist Lachung Monastery enclosed by apple orchards. Yumthang Valley’s Shingba Rhododendron Sanctuary thrives closely. Additionally, Lachung is the base camp for the Rhododendron Valley Trek. The most scenic trek begins from Yumthang Valley and ends at Lachen Valley. The place also offers breathtaking sights of untouched pine forests, crystal streams, and waterfalls, hot springs, and the valley of wildflowers.

The place remains cool in summers and during winters the temperature drops down to minus. The place offers a promising escape from the blistering summer heat and the crowds of the cities. The springtime offers the heavenlike view of the rhododendron bloomed mountains and valley adorned by colorful blossoms. During winters, the town remains blanketed underneath the white snow. Regardless of the time of your visit to Lachung, you should carry warm clothes and shoes to keep your self warm. The weather of Lachung remains frosty during the morning and nighttime even in summers.

What is the best time to visit Lachung?

The best time to visit the Northern districts of Sikkim is during the months of May to October. During these times the temperature lingers between 10 Degree Celsius to 16 Degree Celsius. The greenery and wildflowers can be witnessed during these months. Also, you can indulge in treks, brief hikes, hot springs bath during this season. The temperature dwindles to -5 Degree Celsius from December to February. The entire region turns pristine white during winters. You can plan a trip to Lachung depending on your preferences.

Car rentals are available from the Capital City Gangtok. The cost of travel to Lachung from Gangtok may vary depending on the time of your visit and the choice of vehicles. Shared vehicles and private taxis are available.

Do we need a permit for Lachung?

Most parts including Lachung, Yumthang Valley in the Northern district of Sikkim fall under protected areas. Visitors, therefore, should obtain a Protected Area Permit to gain access to North Sikkim. Permits can be obtained from the registered tour operator in Gangtok, Sikkim. Foreign Nationals are restricted from visiting the restricted border areas in Sikkim.