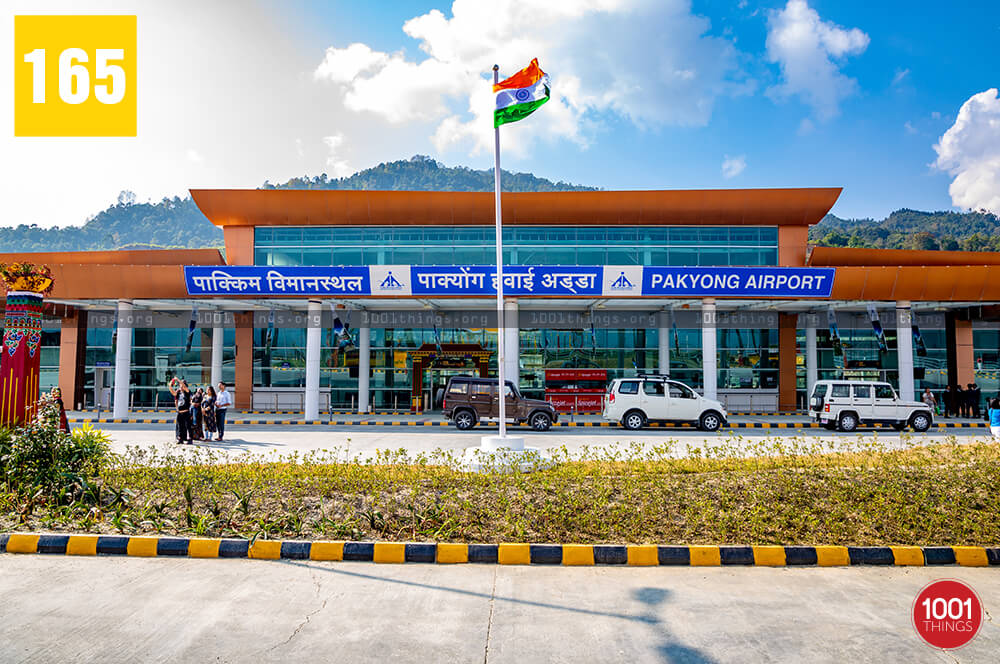 Pakyong Airport Sikkim – Sikkim is admired as one of the beautiful places in the world. The tiny Himalayan state in India snuggles between Tibet in the north, West Bengal in the south, Bhutan & Northeastern states in the east, and Nepal in the west. The country’s first spit-free zone and the world’s first 100% organic state has boosted the accessibility by declaring Sikkim airport opening date and the region ultimately began the operation of Sikkim’s first airport at Pakyong.

Located 35 km away southwards from the capital city Gangtok, Pakyong Airport, Sikkim is the first greenfield airport of Northeast. Standing at an elevation of 4,500 ft, the airport is one of the 5 highest airports in India. Unlike the airports constructed choosing the wide flat surface, Pakyong Airport is a remarkable creation that reflects the engineering feat on the rugged mountainous terrains.

The geotechnical cut-and-fill procedure was applied while carving out the side of the mountain. The airport is considered an engineering wonder as the unique techniques of slope stabilization and soil reinforcement methods has been implemented here.

The runaway of Sikkim’s first airport at Pakyong measures about 1.75km long and 30m wide. The taxiway of 116m joins the apron (106m by a 76m) that can keep two ATR-72 aircraft. The airport also has parking space for more than 50 vehicles and 3,000 sqm terminal building for the passengers, 2 sophisticated CFT, an ATC tower-cum-fire station, high-intensity runaway lights, etc.

Enclosed by the engrossing vistas of snow-capped peaks, cloud-kissed mountains, and luxuriant slopes and hills, Sikkim Airport is the country’s 100th airport and marks a breakthrough for the Indian aviation. Established at an offbeat region, Pakyong Airport, Sikkim presents one of the most compelling airport strategies in the world.

This state-of-the-art airport spreads over 990 acres and is constructed from the empty fields from scratch. The foundation of the airport at Pakyong was laid in 2009 and was inaugurated by the PM Modi in 2018. The 24th September 2018 signified as Pakyong Airport opening date, that is 9 years after the foundation stone was laid.

Before the construction of Sikkim’s first airport at Pakyong, Sikkim was the only state with no operative airport. The roadways were the only mode of accessibility to Sikkim. Travelers seeking to travel via air would require to travel from Bagdogra Airport (124km), which was then the nearest airport at the neighboring state of West Bengal. Today, the state operates one of the picturesque airports in the world.

Pakyong airport flights operate to between Kolkata to Pakyong. Spice Jet remains the first commercial flight to operate in the region. The establishing of the airport and the operation of Pakyong airport flights will be an exceptional boost to the northeastern part with the entire country. The Druk Air of Bhutan also intends to launch flights from Paro to Pakyong on 1st January 2019.

The reinforcement or the support wall of the Sikkim’s first airport at Pakyong is one of the highest in the world. The strategic location of barely 60 km between India and China is expected to boost the Indian Armed forces. The airport will serve as a significant means for the Indian Air-Force for landing various kinds of planes. The Sikkim police have taken charge for the safety and protection of the Pakyoung Airport.