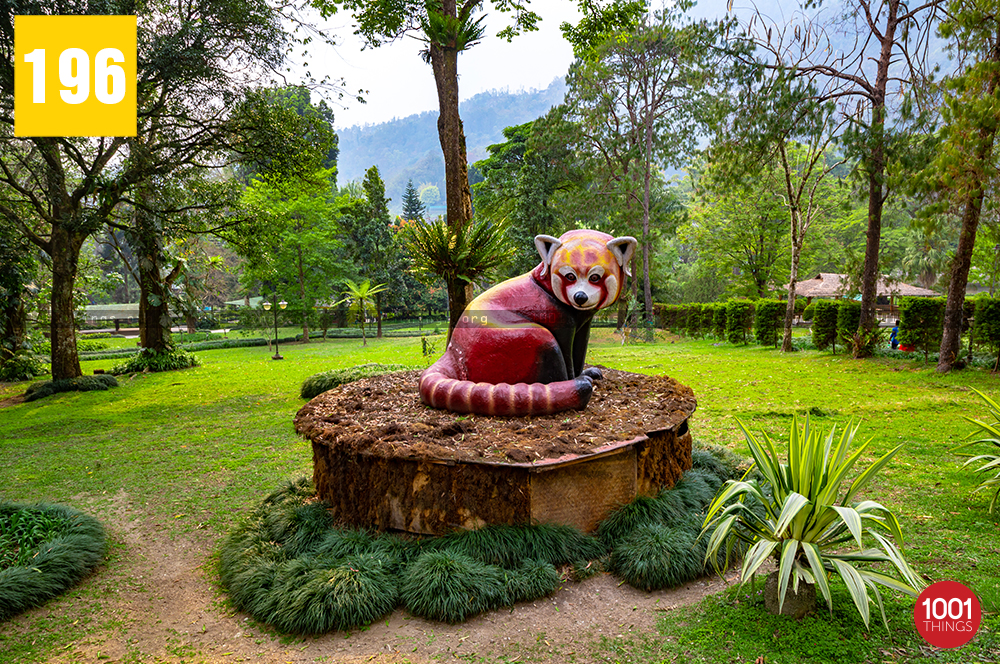 Saramsa Garden Gangtok – From an Orchard to an Orchidarium

This blog about Saramsa Garden Gangtok features the fact-based information. Such as-
1. Location & Accessibility
2. An Insight Into its Inception
3. Why it’s Called ‘Ipecac Garden’?
4. The Rise of Sikkim’s Orchidarium
5. A Peek Into its Development & Current Status
6. Entry Fee & Conveniences 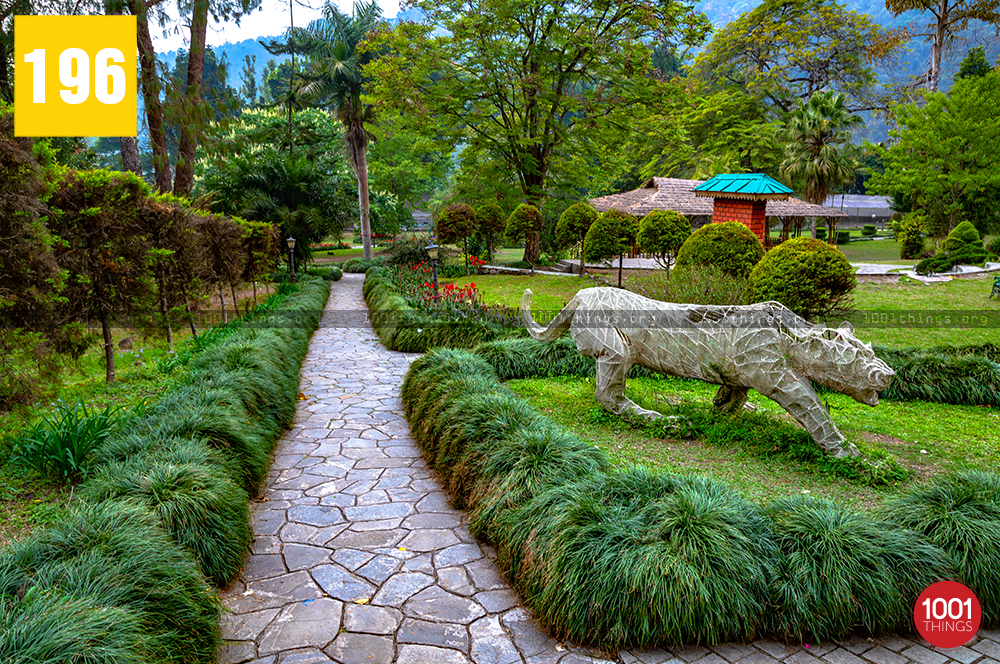 Saramsa Garden snuggles amid the hilly slopes of Pakyong and Gangtok. It lies at a motorable distance of 14km from the main city. The Garden sprawls over an area of 6 acres. Saramsa Garden is one of the prime places to visit near Gangtok. The place is home to a large variety of faunas that has been cultivated since Colonial reign. An hour drive is required from the main city to reach the place. There are a good number of car hire services available in the city. They charge a fairly decent amount for transfer and sightseeing trips all over the state.

An Insight Into its Inception 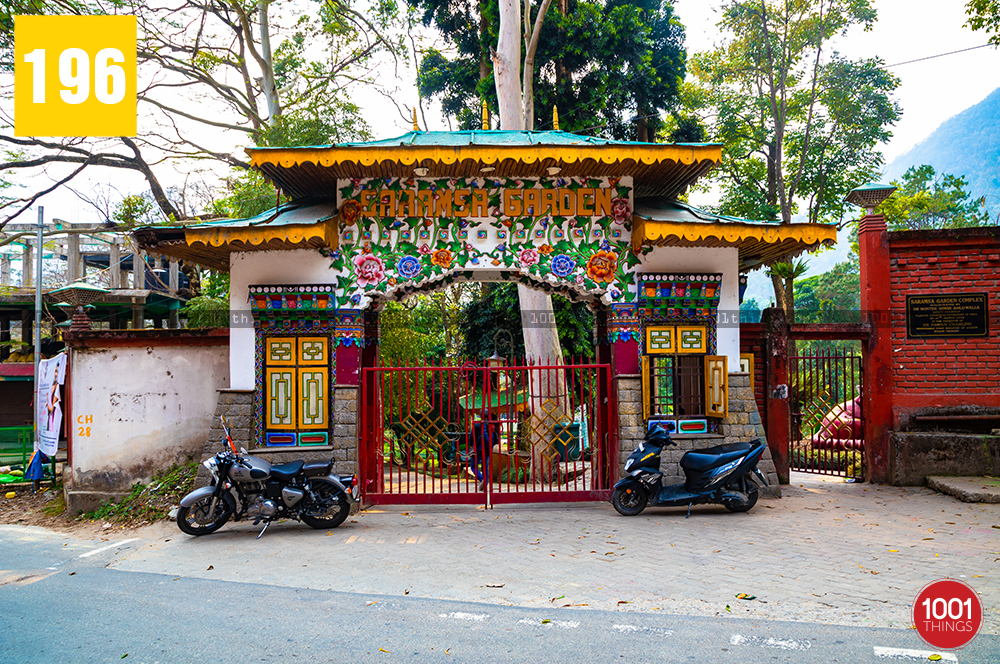 Tracing back its origin, Saramsa Garden was established in the year 1922. The garden served a wide range of objectives. It was established by Sikkim Forest Department. The garden primarily served the purpose of cultivating fruits for the British executive officers and the Namgyal Royal family. Initially, fruits like oranges, pineapple, guava, litchi, bananas were cultivated here. Every week, a decorated basket called Dati, filled with fruits were shipped to the Palace and British Residency. 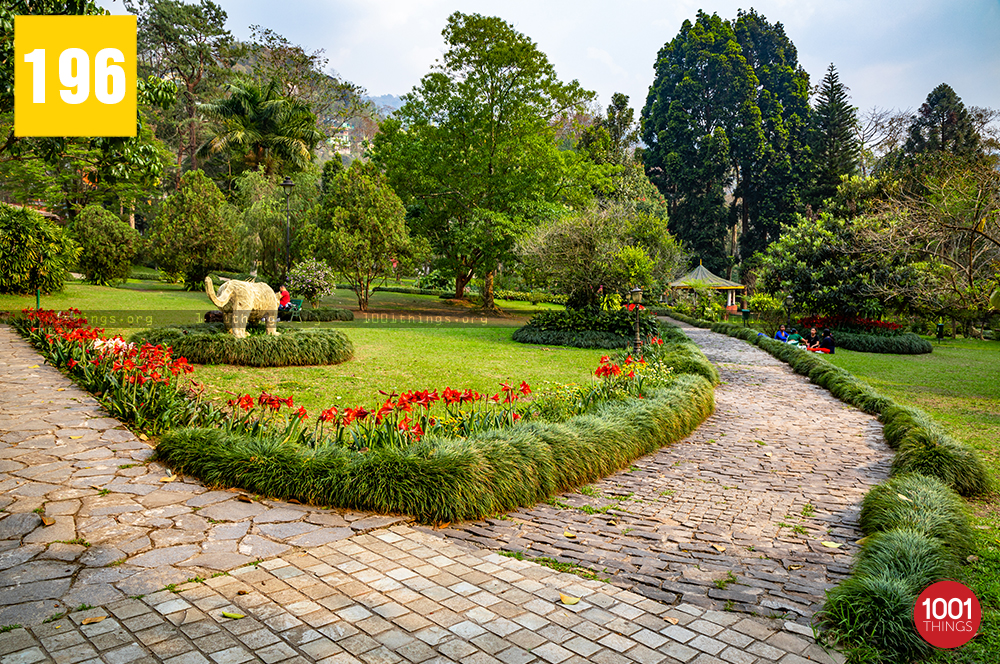 Owing to the deep interest in floriculture and horticulture, the Forest Manager Bhim Bahadur Pradhan, profoundly involved in sustaining and care of the garden. The practice of fruit cultivation lasted till 1940. From its establishment in 1922- 1954, he devoted himself in the keeping of the garden.

Later, the Forest Department introduced Cephaelis ipecacuanha, a medicinal plant from Zohore, Malaysia. The plant was primarily used for producing Emetine, which was extracted in the form of syrup. Emetine aka syrup of ipecac retained a powerful alkaloid. Having immense importance, emetic (alkaloid) was used in medical research. Thus, Saramsa Garden obtained it’s named ‘ Ipeca Garden’ from the medicinal plant cultivated there.

But, in 1970, it was found that the cultivation of Cephaelis ipecacuanha was no longer beneficial. Thus, in that very year, the cultivation of ipecac was stopped. However, the garden was continued to be called as ‘Ipecac Garden’.

The Rise of Sikkim’s Orchidarium 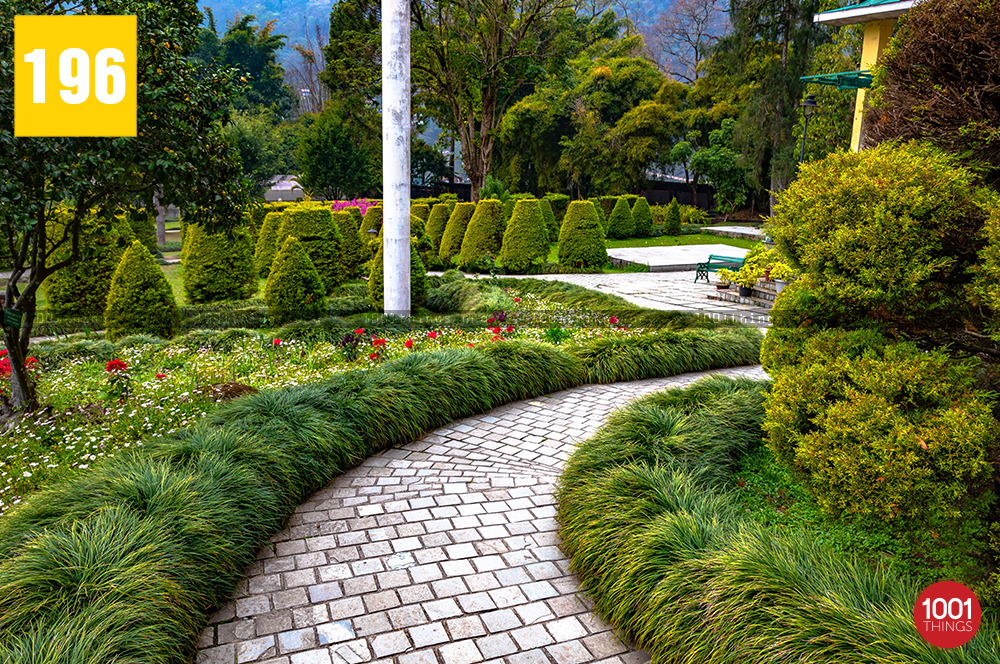 Long after, in 2008, the garden got a global focus. ‘International Flori Show 2008’ the state’s first international flower and horticulture exhibition was hosted here. The Government of Sikkim held this event to promote the state as an agricultural center. Around 50,000 visitors attended the event in a single day. Thus, the event intensified the significance of the garden. The place rose from a mere picnic spot to the prime horticultural carnival hub.

A Peek Into its Development & Current Status 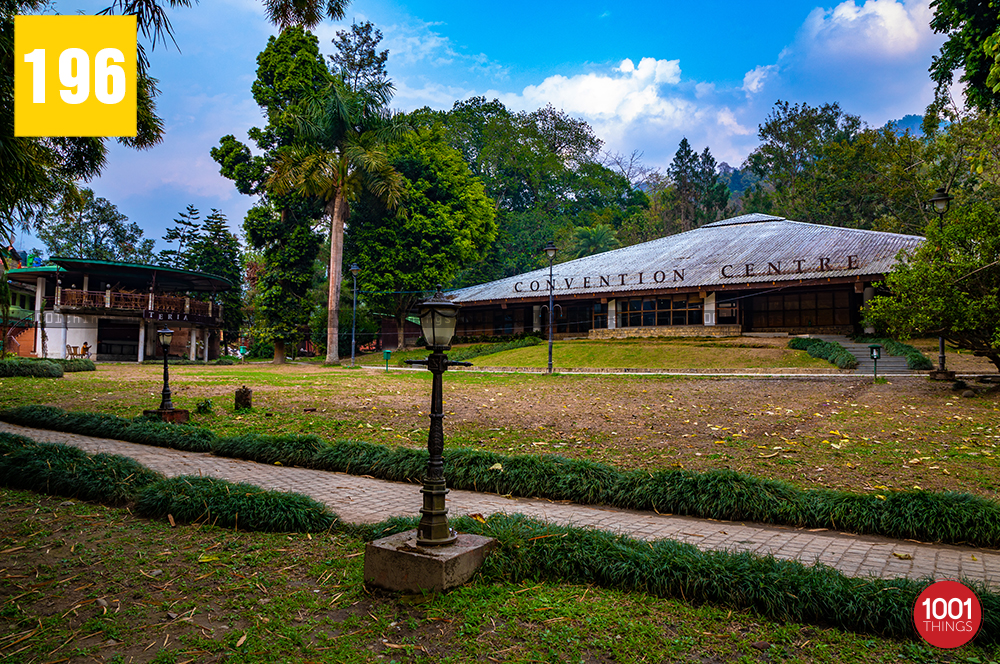 Over the years, the Government of Sikkim has taken initiatives for its development. Amongst the host supplements, a modern Convention Center is constructed at Saramsa Garden. It has a space occupancy of 500 people. The Center serves as a suitable place for organizing private meetings, events, functions, etc.

There are several sections in the garden known as blocks. The garden has its exclusive nursery at the far right corner from the main gate. Right after which stands the Conventional Center. The entire garden is well manicured. The lush green lawns and a large variety of flowers adorn the garden. 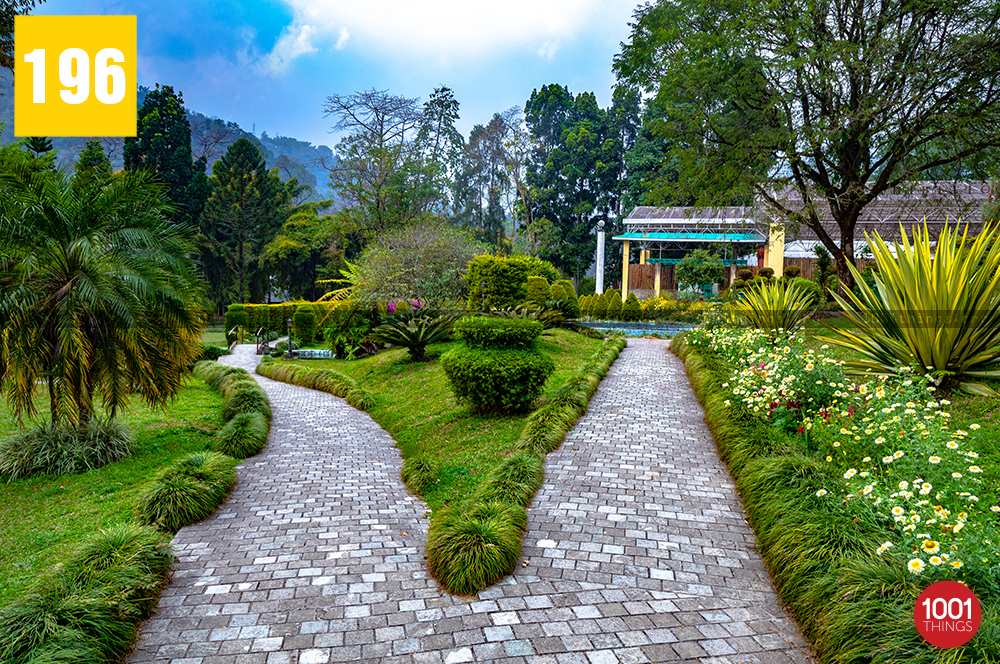 The distinctly shaped hedges bearing different forms and the idols of red pandas, snow leopards adds to its appeal. The canopy of greens and the bench underneath ideally serves as a place of relaxation. The sunlight barely penetrates the dense vegetation at some areas of the garden. There is a mini pool. A mini foot bridge is constructed over it. You can get a fascinating sight of the landscapes and River Rani plunging down the valley at the distance. 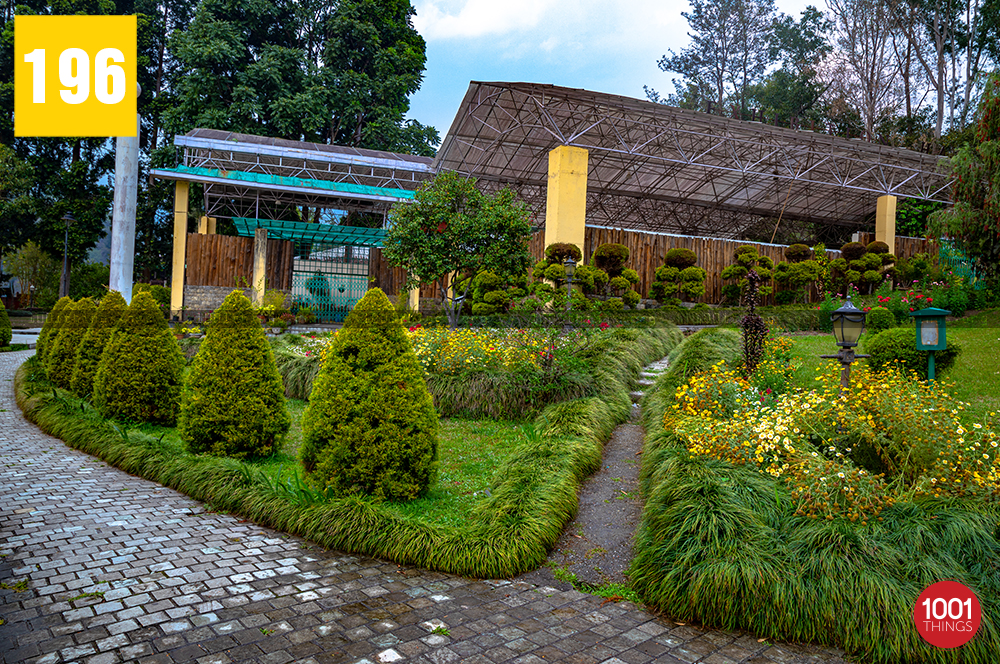 The entry fee is Rs. 10 per head. The Garden has washrooms conveniences for the tourists. The place retains absolute serenity. Besides. the visual attraction, the place is an ideal haven for the ones who are interested in floriculture, horticulture, botany. There are many food stalls just outside the main entrance and roadside. You can try some amazing local street foods and cuisines along with sightseeing. So, planning for a trip to Gangtok this summer? Do Saramsa Garden!