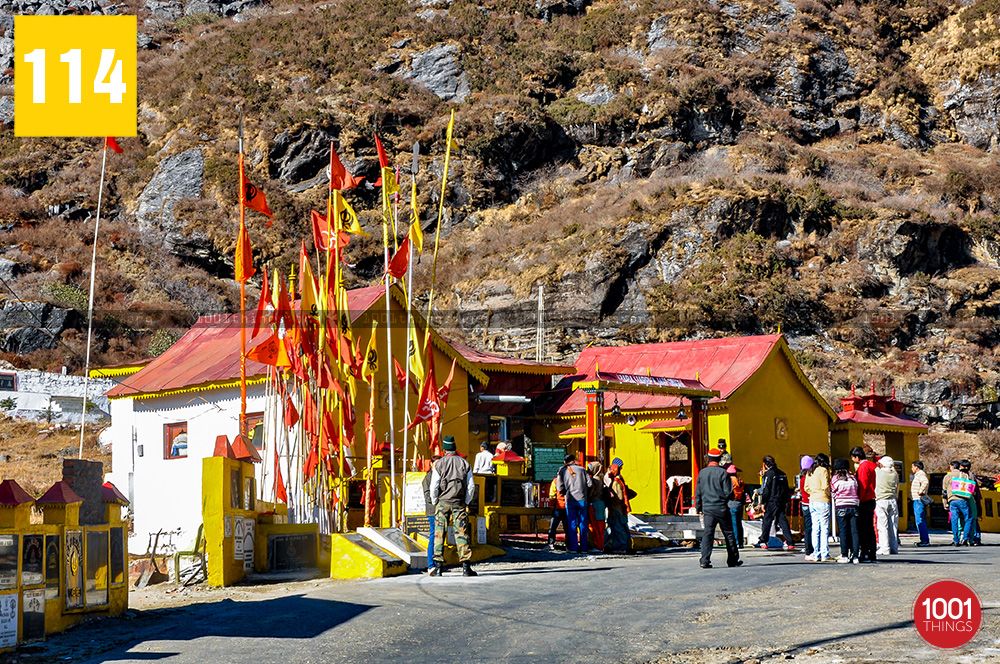 Baba Harbhajan Singh – Baba temple is a holy shrine situated at a distance of 60 km from Gangtok towards Nathula Border between China and India.

It was constructed to show reverence to Baba Harbhajan Singh, a soldier of an Indian army, who was drowned in a glacier while trying to lead an x_column of mules carrying supplies to a remote outpost.

The search operation was launched and every effort was made to find his missing body but it was nowhere to be found. According to the legend, it was Baba himself through a dream, who helped the searching party to find his body covered under a huge lump of snow and even expressed the strong desire to have a samadhi made after him.

It is further believed that during the event of a war between India and China, Baba would warn the Indian soldiers of any impending attack at least three days in advance. It is said that he did continue to serve the nation even after his death.

This folklore has been very popular not only among the Indian soldiers but also to the Chinese side as well. In fact during flag meetings between the two nations at Nathu La, the Chinese would set a chair aside in honor of Harbhajan Singh who has since come to be known as “Saint Baba”.

The samadhi was built near Chhokya Chho at an elevation of around 4,000 meters, which is known as Old Baba Mandir. This samadhi is less visited by tourists.

Visitors need to climb 50 stairs to reach the bunker. This was the place where Baba was posted during his service period in the Indian army.

However, the new samadhi or temple was constructed for the convenience of the tourists at the junction of Kupup Gnathang road and the trail leading to Menmecho Lake, on November 11, 1982, which came to be known as New Baba Mandir.

This new temple is visited by thousands of tourists every year, in fact, it has become one of the most visited tourist spots of Sikkim.
The temple consists of three room chambers, the room at the center features the large portrait of Baba Harbhajan Singh along with other Sikh Gurus and Hindu deities.

The personal room of Baba is on the right side which harbors different essential articles for day-to-day use and a clean properly arranged bed.

Even the tidy uniform and well-polished shoes are kept, according to the legend the boots became muddy by evening and the bedsheets were crumbled in the morning.

The temple is maintained and look after by the Indian Army and further beautification has been done along with the surroundings, the beautiful idol of Lord Shiva has been placed near a small waterfall which has become the new point of attraction of the place.