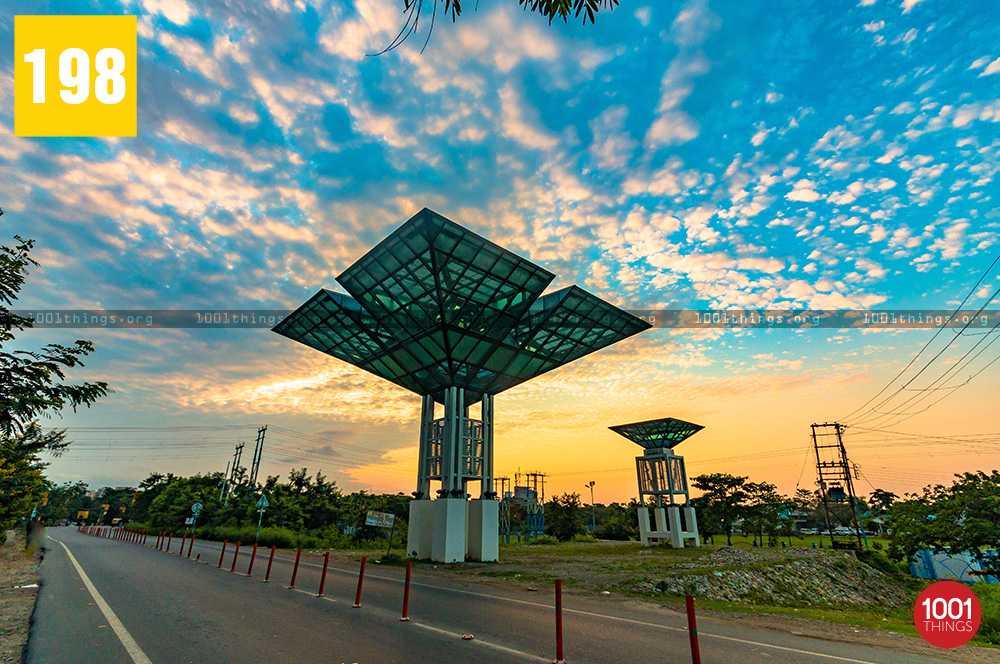 Siliguri Gate – The Splendor Of The Northern Plains

This blog about Siliguri Gate covers the detailed information based on actual observation. The info incorporated are as follows-

The Siliguri Gate At Glance & It’s Conception
The Description: It’s Distinctive Features & The Surroundings
The Location, Nearby Places Of Importance On The Either Side
Siliguri Gate- A Contemporary Masterpiece 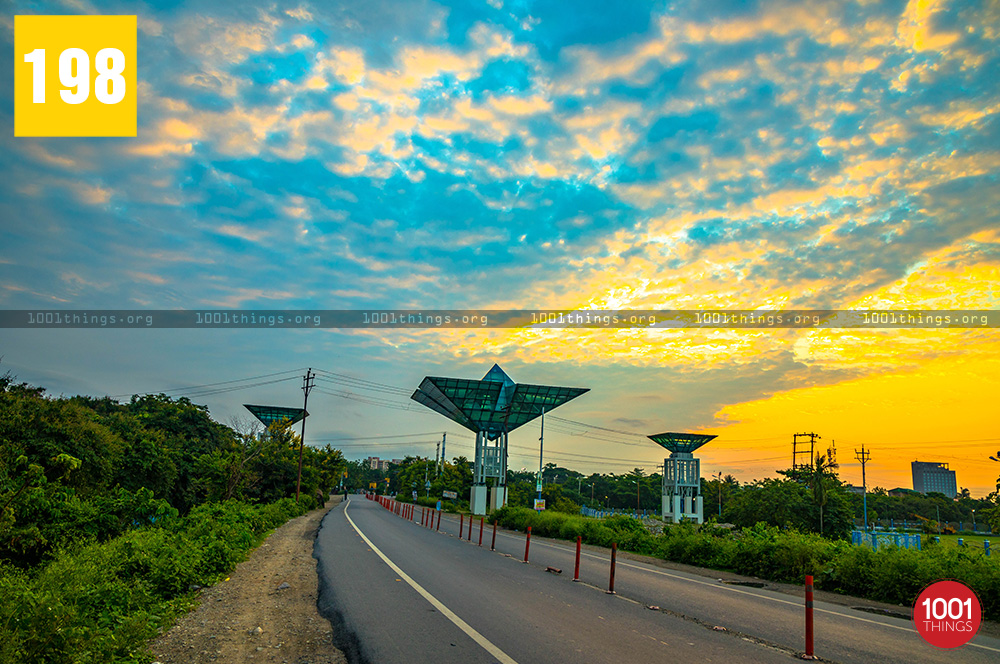 Shining in its utmost shimmer under the sunlit skies and enchanting the onlookers with the shades of the rainbow during the murky nights, Siliguri Gate truly is a man-made wonder. It enraptures every sight with its fragile yet sophisticated appeal. The imposing structure possibly should have been inspired by the Egyptian pyramids and the Stars. The uppermost portion actually is a huge dispersive 3D prism. It is built of fiberglass and set on steel frames. 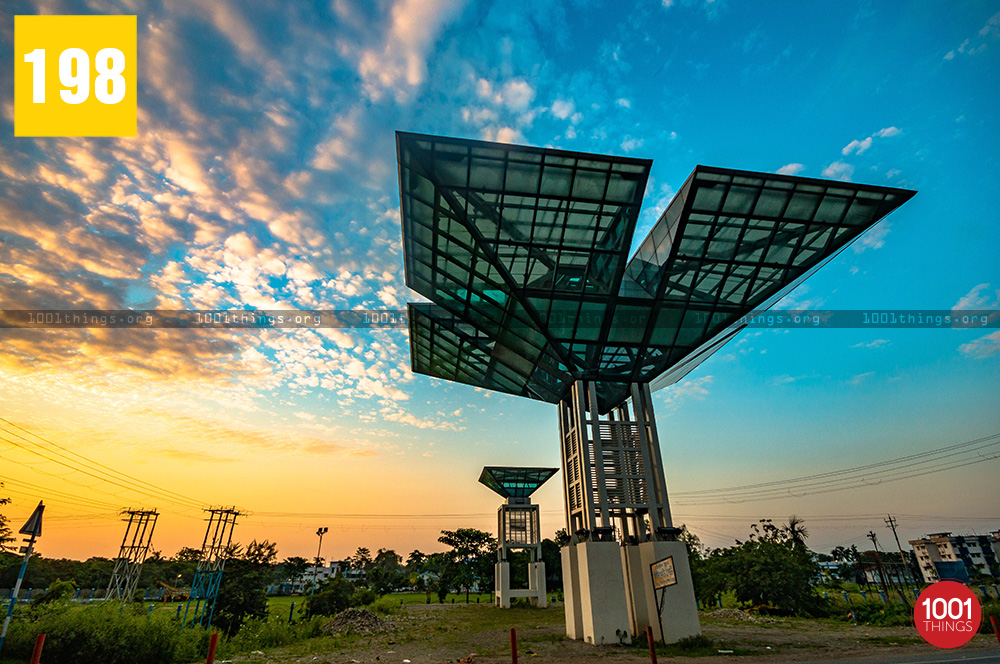 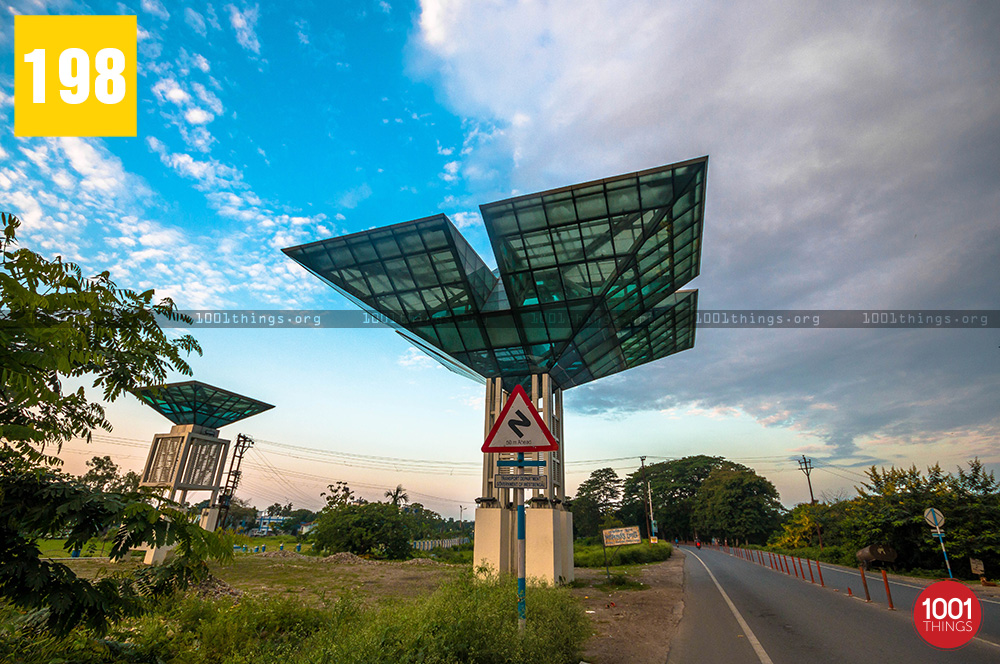 Overall, the Gate comprises of three structures. The one in the center is massive and stands twice the size of the two structures at it’s either side. The topmost part (prism) is ideally placed above the inverted pyramidical structure. The two smaller structures resembling with the main structure serves as the refractive medium. The lights are passed from either side, both evenly tilting at an approx angle of 45 Degrees.The entire structure gleams in its utmost sheen and luster during the day time. Whereas, the massive prism disperses the shades of rainbows during night time. The whole crystal is waterproof and thus remains unharmed by monsoon downpour. 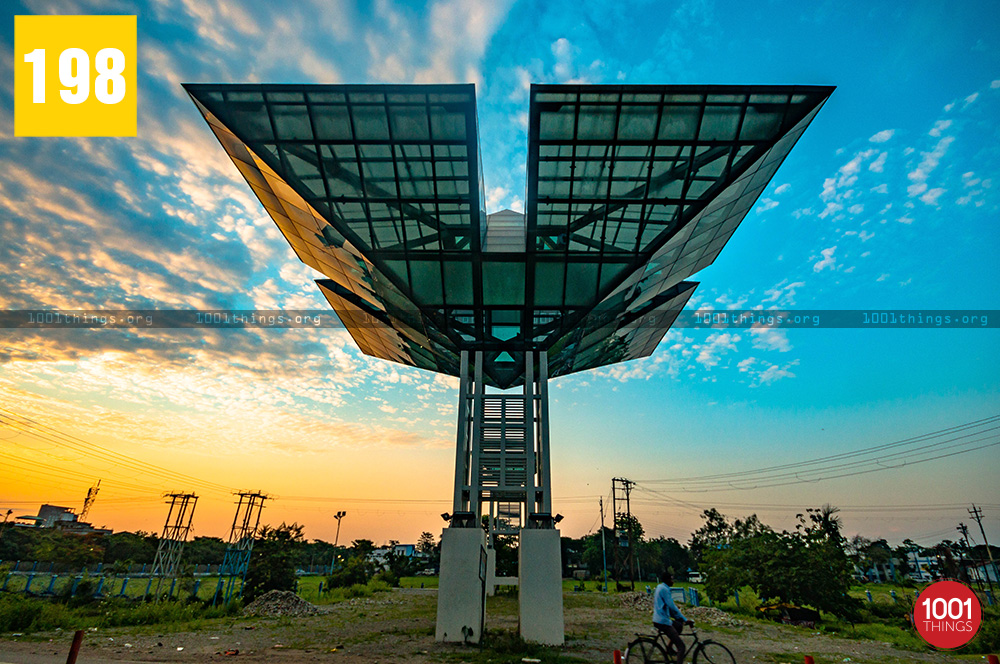 Siliguri Gate is one of it’s kind to be built in the entire state. The entire structure is uniquely conceived. Constructed at the outskirts of the main city, the gate overlooks and stands amid the vast stretch of plains. The gate is surrounded by adequate greeneries that develop to its extravagant glamour in spring and monsoon seasons. Apart from the tied column, every bit of the crystal is built with the fiber glasses. The entire structure renders an appeal of a really fragile structure.

The Location, Nearby Places Of Importance On The Either Side 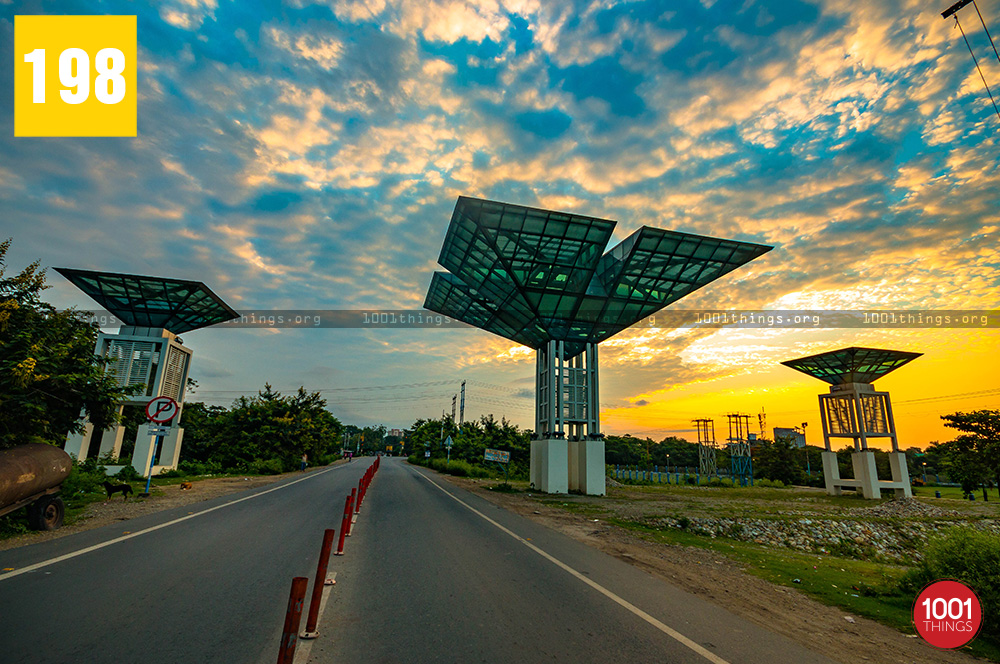 Constructed on National Highway (NH10), the gate stands just in front of Siliguri Police Commissionarate office. The Gate marks the point of entry to the major parts of Siliguri. The Gate serves as a significant landmark of the city. It stands nearby to the major attractions and significant places to explore throughout. If you concentrate at one side of the Gate, you can find – City Centre, Uttarayon Township, Neotia Getwel Hospital, Dr. Chang’s Hospital, Inspira Knowledge Campus, Siliguri Science Centre, and Webel IT Park. 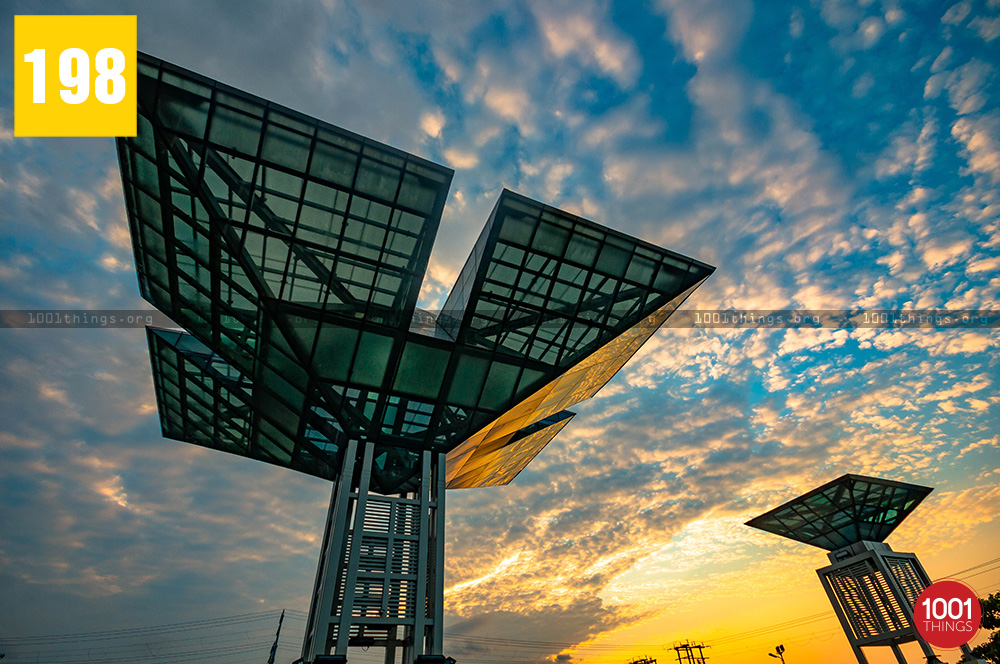 Contrarily, if you move towards the other side, you will come across a series of additional major places. Starting right from famous Darjeeling More, to the city’s international Corporation, i.e., Courtyard by Marriot. A little ahead rests Siliguri Junction, Mahananda Bridge, Bidhan Market, Surya Sen Park, Iskon Temple, etc. 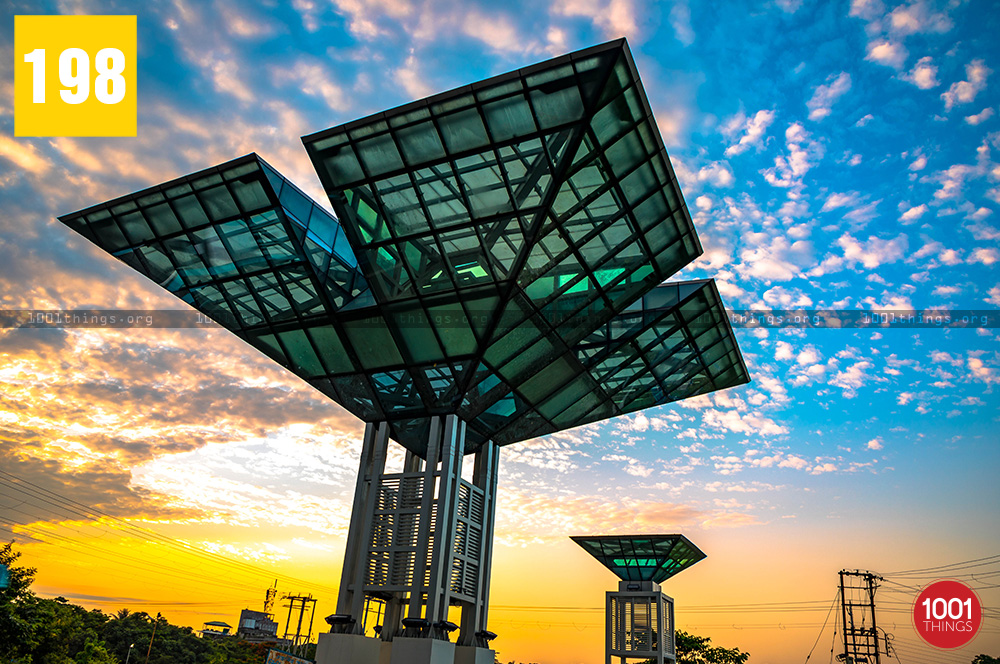 Despite the delicate appeal of the crystal, the entire structure is set up on the steel frame. The pillars supporting the massive crystal is made of iron and concrete and are entirely whitewashed. So, the skepticism and the assumptions of ‘labeling it as fragile’ proves negative. Siliguri Gate stands as a brilliant engineering feat. It stands tough and appealing, sufficing the representation of sophistication and modern art. 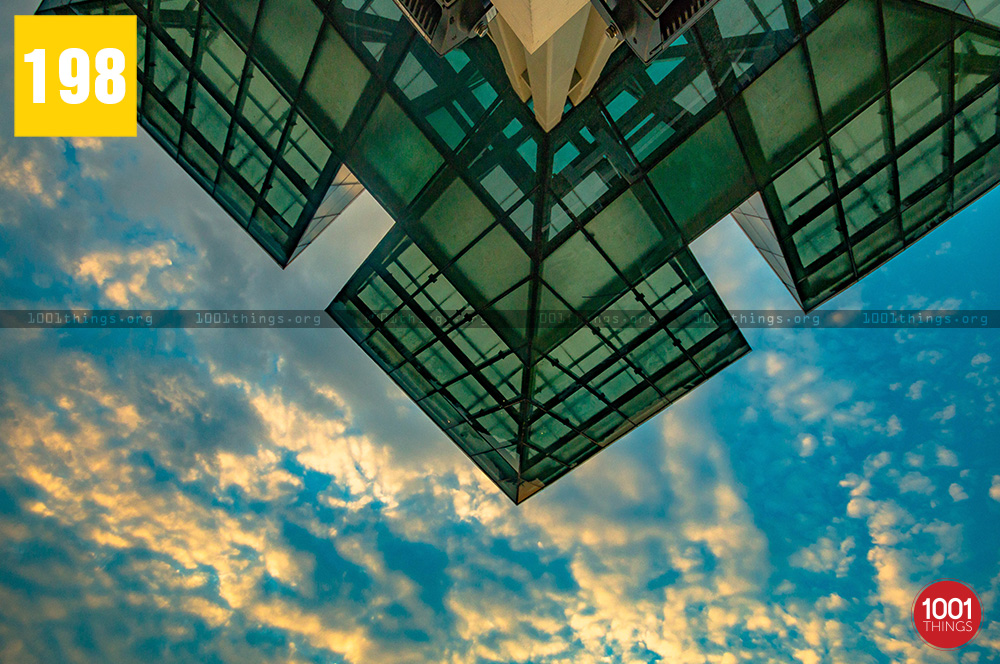 Despite the technical issues and errors in designs, the authorities thoroughly scrutinized the flaws, reviewed the designs. Eventually, the Gate was restored to the envisioned reality after the through modifications. A hefty cost of 3.50 crores was sanctioned for its construction by the State Government. The Gate adds to the charm of Siliguri, which is the only enroute to the Northeastern States, Bhutan, and Bangladesh.