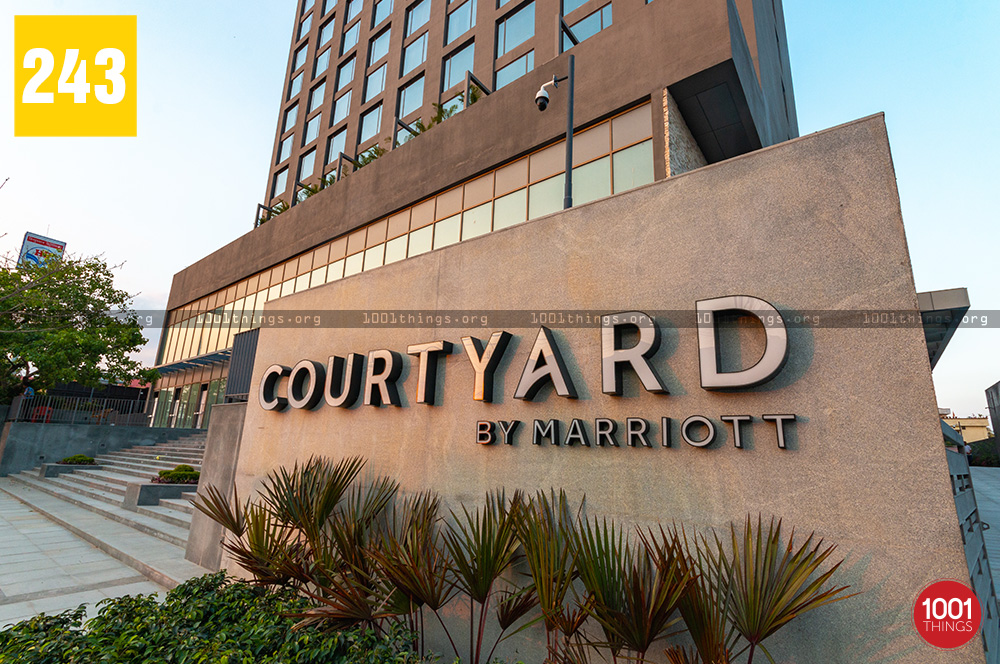 Courtyard by Marriott Siliguri: When it comes to luxury hotels, the name Marriott is well-known. It is most recognised for its flagship hotel brand, J.W. Marriott, which is named after the Marriott Corporation’s founder John Willard Marriott, Sr.. Marriott International’s Courtyard by Marriott is another well-known hotel brand. The brand was established in 1983 with a mid-priced target market of business travellers and travelling families. Despite being mid-priced, the hotel provides 5-star services and amenities living up to its long-standing name and reputation. There were 1,254 Courtyard Marriott Hotels globally as of June 30, 2020, with Courtyard by Marriott Siliguri being one among them. 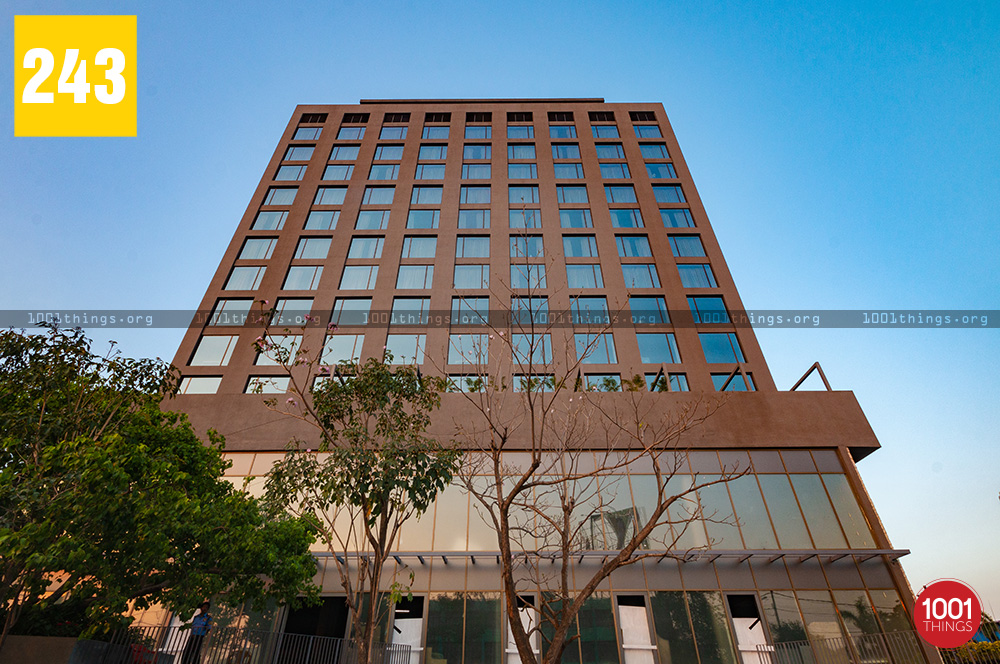 The Siliguri property was established in 2019, making it one of the first in not just Siliguri, but also North Bengal. However, following J.W. Marriott Kolkata, Courtyard by Marriott is the second Marriott property in West Bengal. Because of its location, the Courtyard by Marriott in Siliguri stands out among its peers across the country. The property is in a fantastic location, with Siliguri serving as a gateway to the Darjeeling and Sikkim highlands, as well as the North East and Bhutan. 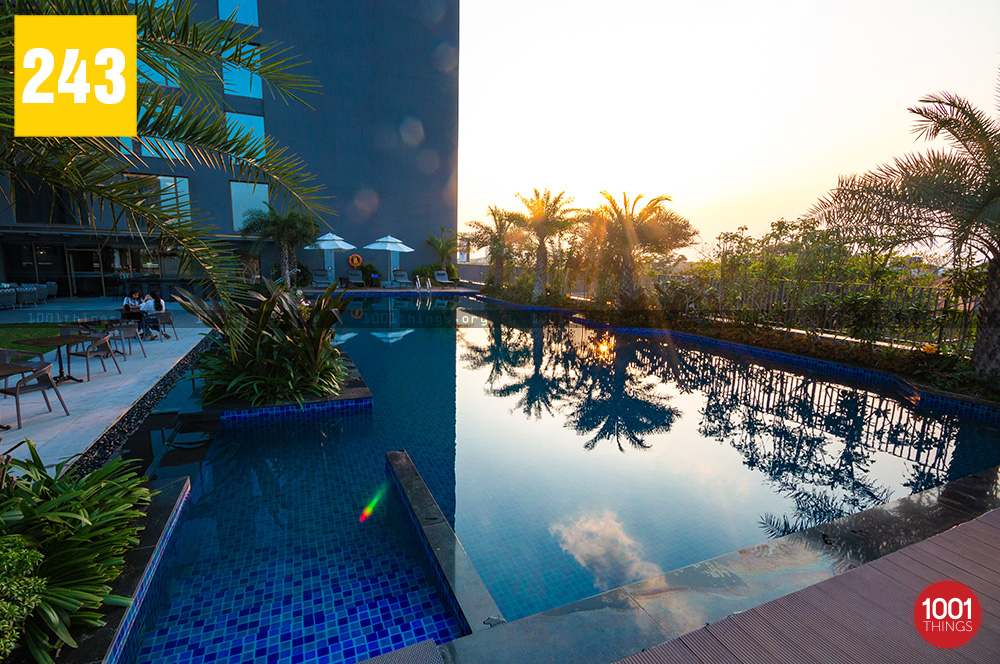 The structure itself is a modern architectural trailblazer in a city that is rapidly embracing more modern design. The hotel offers 91 rooms with all of the promised amenities. This offers, among other things, sophisticated meeting and conference rooms, a range of dining options, an outdoor swimming pool, and a fitness facility. 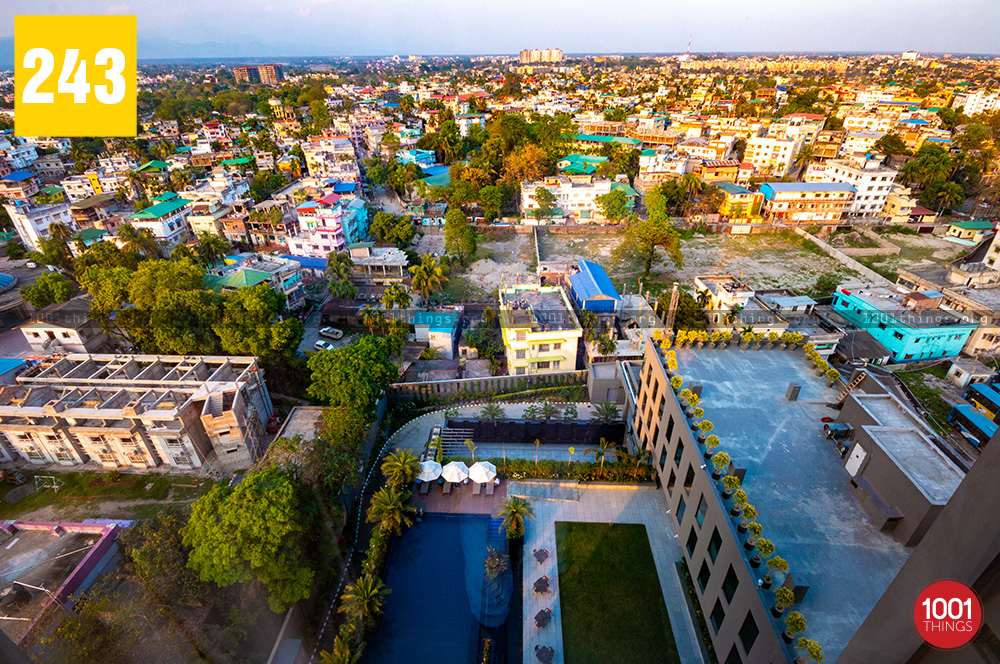 If we were to be specific about facilities provided inside the rooms, each room has a smart box and docking station with a 2.6-inch LCD display, dual USB chargers, universal Bluetooth speakers with FM radio, and a single alarm clock with the ability to wake guests up to music. There is free WiFi, free wired Internet, and 24-hour room service in all 91 soundproofed rooms. Refrigerators and coffee makers are provided as conveniences, and thoughtful details such as pillow menus and bathrobes will be appreciated by guests. 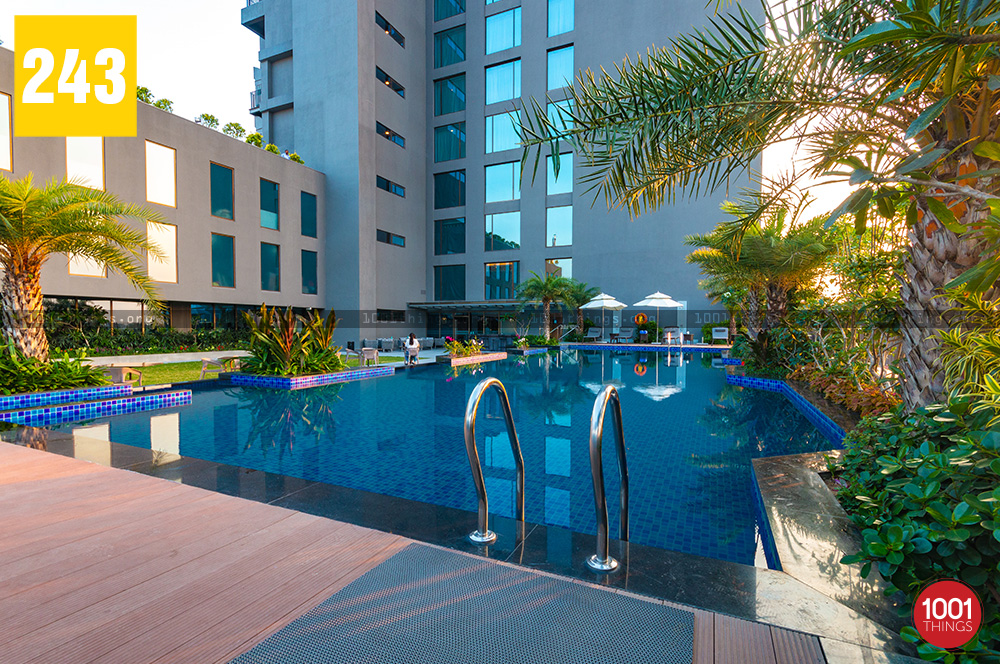 The iconic Siliguri Kitchen is an all-day diner, while K’bar serves authentic local Indian and Western cuisine in both buffet and a-la carte formats. Courtyard by Marriott Siliguri provides the quality of a restaurant-dining experience in the comfort of their accommodations. In fact the restaurant here has become a hit in just two years of its inception. 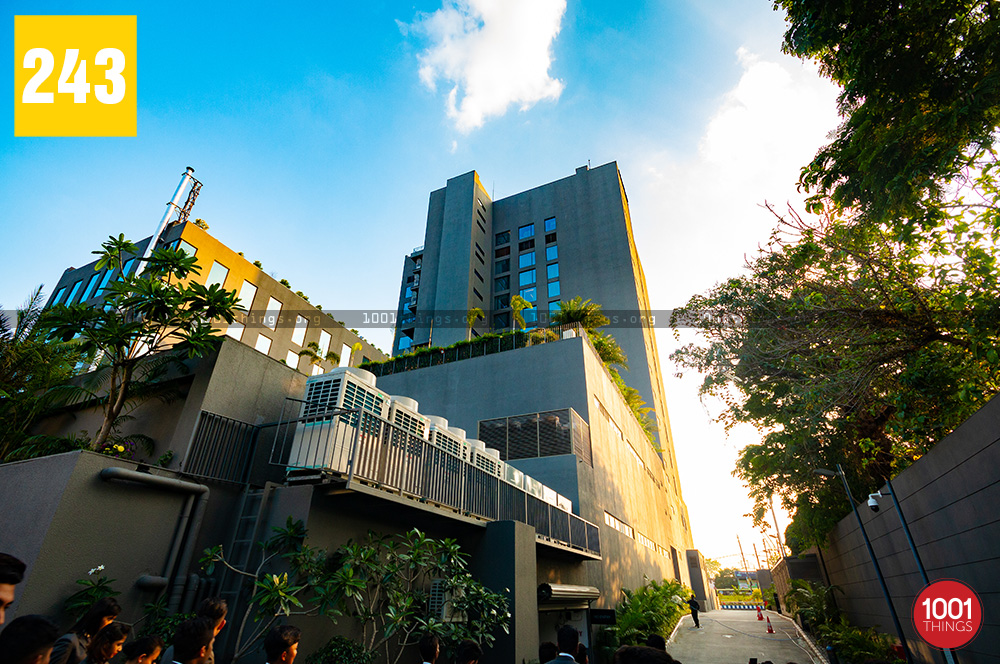 Courtyard by Marriott Siliguri is in a great location because it is central to all of the city’s hot and happening spots, including retail malls. This features major shopping malls such as City Centre, Cosmos Mall, and Vega Centre, all of which are within walking distance of the hotel. Popular marketplaces in Siliguri, such as Bidhan Market and Hong kong Market, are located nearby. 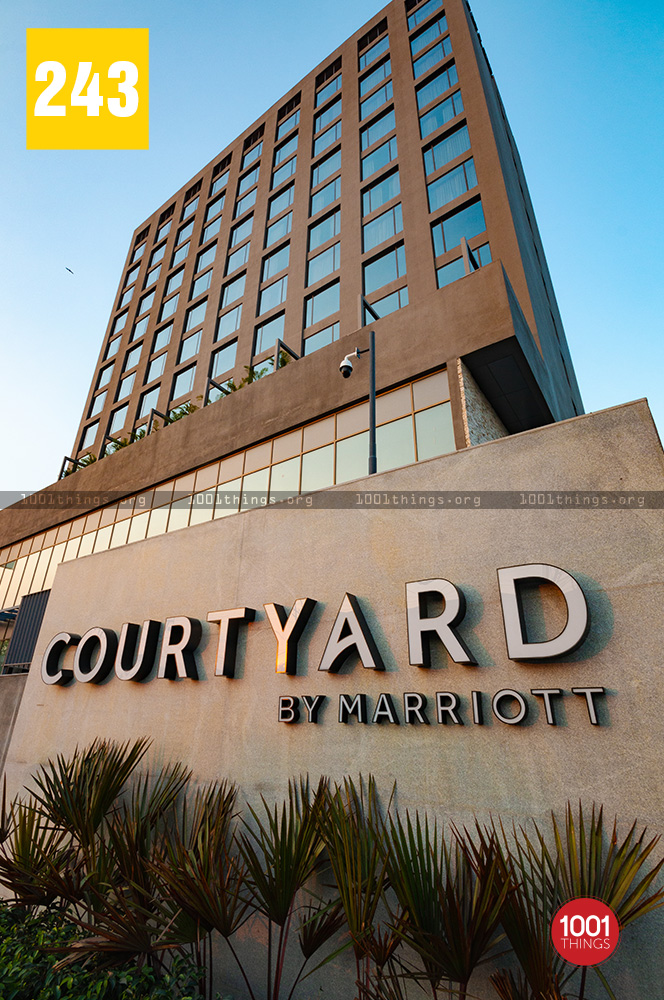 The city’s nightlife is also just around the corner. Aside from that, if you’re feeling adventurous, a day excursion to Kurseong and other tourist attractions are nearby. The site is also only 2 kilometres from Savin Kingdom, an entertainment park, and 4 kilometres from the North Bengal Science Centre. 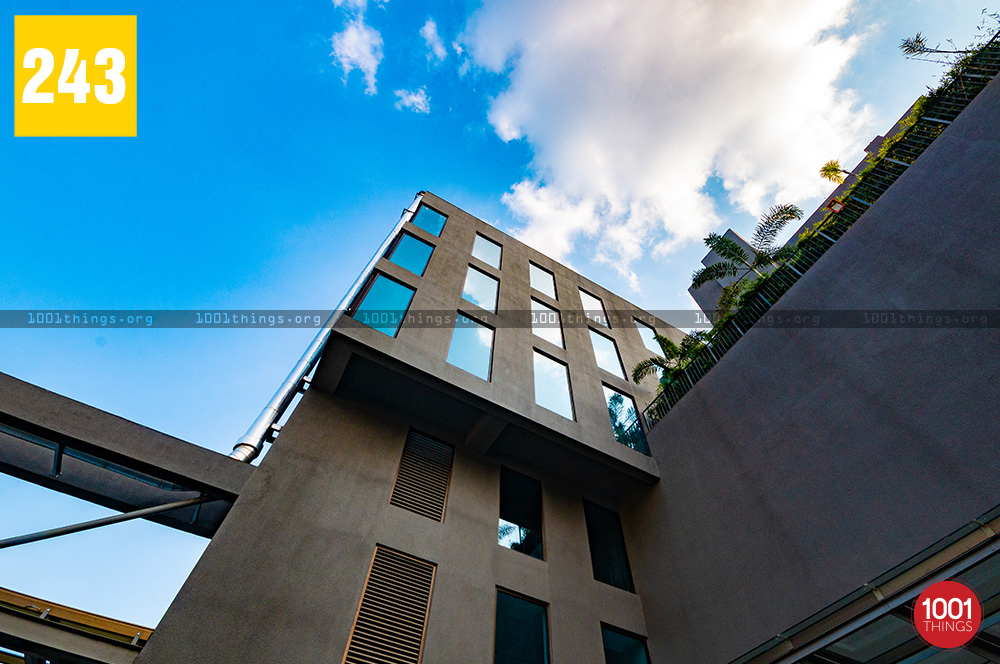 Staycations have been a popular theme among families and the young since the establishment of the property in Siliguri and the pandemic. They spend the weekend enjoying the 5-star amenities and simulating a vacation when they can’t afford a genuine getaway owing to a global pandemic.

How to Reach Courtyard by Marriott Siliguri 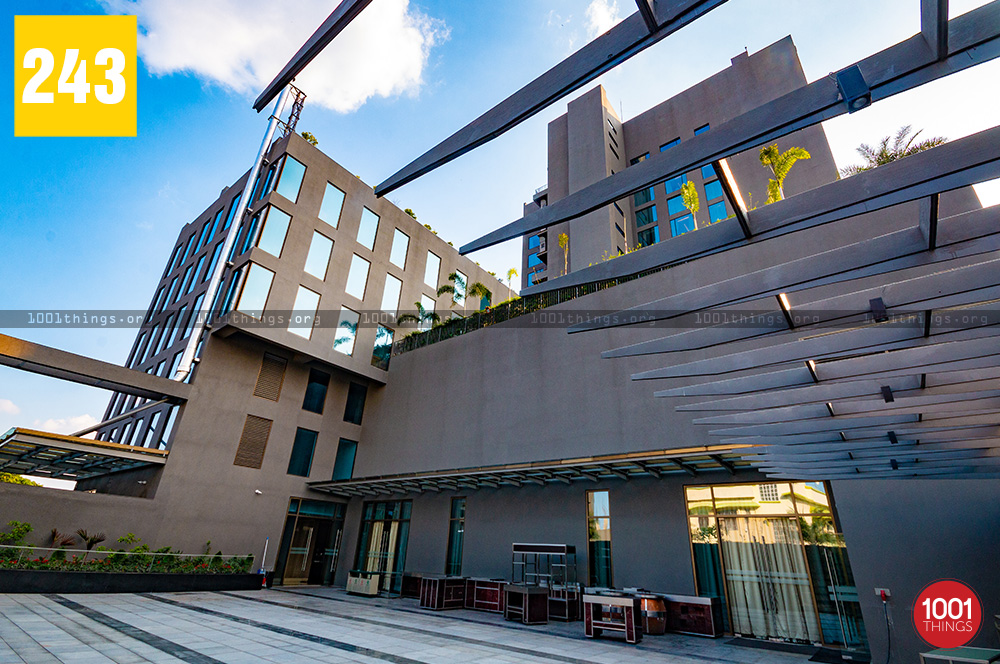 Places to Visit Near Courtyard by Marriott Siliguri

Savin Kingdom: Savin Kingdom in Siliguri is about 2 kilometres away and is highly renowned for its castle-themed amusement park, water park, and kid-friendly atmosphere. Savin Kingdom Water Park, located on the banks of the picturesque Mahananda River in Siliguri, is the place to be when the city’s searing summer heat takes over. There are numerous attractions in the water park portion for you to enjoy. The dry area of this park features exhilarating amusement rides and swings for both kids and adults, like Merry go rounds, Breakdance, Paratrooper, Savin Formula One, Kiddy Columbus, and others.

Cosmos Mall: Cosmos Mall, which opened a decade ago, was the first ‘shopping mall in Siliguri.’ Cosmos Mall in Siliguri is around 5 kilometres away and includes over 75 retail businesses. This shopping mall in Siliguri is a promising zone for consumer requirements, with a number of lifestyle and value stores for apparel, footwear, electronics, accessories, home decor, electronics, and so on, as well as a restaurant and bar, hypermarkets, food court, wellness centre, and a gymnasium. It is an outstanding destination that offers an incredible combination of all.

Vega Circle Mall: Located approximately 4 kilometres away Vega Circle Mall captures its own position for its unique retail experiences. Previously known as Orbit Mall, it was unable to mark its location, but it was later converted into the freshly adorned gorgeous edifice that today presents itself as Vega Circle Mall. It was opened in the year 2016, and since then, it has grown in reputation as one of the top shopping malls in Siliguri. It is conveniently located on National Highway 10, Sevoke Road, Siliguri. Vega Circle Mall has a wide selection of national and international brands to choose from. It is a shoppers’ paradise for individuals of all ages.

Bengal Safari: Bengal Safari was founded to demonstrate West Bengal’s faunal diversity without requiring visitors to explore the entire state. Bengal Safari is the first animal safari park in the North Bengal region, launched in 2016 to increase tourism in the region. It is located in the forested area of Mahananda Wildlife Sanctuary, about 8 kilometres from Siliguri town. It has 700 acres of land covered in dense sal trees, remote from the bustling city sounds, and is suitable for both animals and visitors. The nicest part about Bengal safari (Siliguri) is that the enclosures in which the animals are kept are made in such a way that the animals feel at ease, and the space of each enclosure is large enough for the animals to walk around.

Matigara Hat: The Matigara Hat in Siliguri’s outskirts is a popular market, with people coming from Darjeeling Hills, Sikkim, and even the far-flung Nepal Terai to buy supplies, garments, and other items. It is one of the region’s oldest weekly hats, especially noted for handcrafted handicrafts and local produce. The headgear caters to people from all walks of life who come to purchase for their daily necessities in and around Matigara.

City Centre: The City Centre is approximately 2 kilometres from the Courtyard by Marriott and is conveniently located on National Highway 31, Siliguri’s lifeline. The property is located in the township of Uttorayon. It has become one of the most popular tourist spots in the entire region. It is an ultimate shopping complex featuring a variety of nationally and internationally acclaimed brands under one roof, making shopping a one-of-a-kind experience.

Science City: Science city Siliguri, located only 2.5 kilometres away, is a walk through the natural splendour of North Bengal’s forests. The science city enchants you from the moment you enter. The Gokul and hazel trees, the long length of Kamini shrubs, and the tranquillity of nature lead you to the doorsteps of a realm that will leave you puzzled and wanting more. The North Bengal Science City, which was founded with the goal of instilling, fostering, and expanding scientific curiosity among the people, has grown into a highly recognised and renowned institution throughout the years.

Rohini Road: The Rohini Road which is clean, wide, and well maintained, is now the most convenient route to Darjeeling and Kurseong. The majority of people would want to ride this route because of its high quality and beautiful scenery. There are various shops along the road for travellers who want to stop for a snack. The vistas along the route are breathtaking, and some travellers may simply stop for a moment to capture the moment on camera. The serpentine shape of the road, with its different curves and bends, adds to its allure, but it is a little treacherous to drive on. If you’re lucky, you might see some wild elephants along the lower height of the road.